This is relatively new research and not posted with the intention of trying to change your view. Please feel free to share.
INFORMATION ON EARLY SPAYING/NEUTERING
"For those who wonder why we do not advise neutering your dogs before they are fully grown... this diagram shows you when growth plates close.
The sex hormones in both dogs and bitches, control when these growth plates close, ie when these bones stop lengthening.
If you neuter BEFORE they are closed, they keep growing longer, resulting in a taller, thinner, narrower dog but more importantly, in a dog who has some bones the right length and some not, which puts unnatural strain on ligaments, tendons and muscles and the joint itself.
Some of the notations on this diagram give a pretty big window, this is because small breeds will close sooner and larger breeds like the GSD will close much later.
Many people worry that early neutering will stunt their dogs growth but actually the opposite is true!
Please leave your dogs as nature intended until at the VERY earliest, 18 months old and ideally not before 2 and a half - because whilst those growth plates may be all done by 18 months, its only then that your dog STARTS to build his adult musculature and those hormones are involved in that too!"
Emma Judson - Canine Consultant
https://www.facebook.com/Better4Pets/
#better4pets 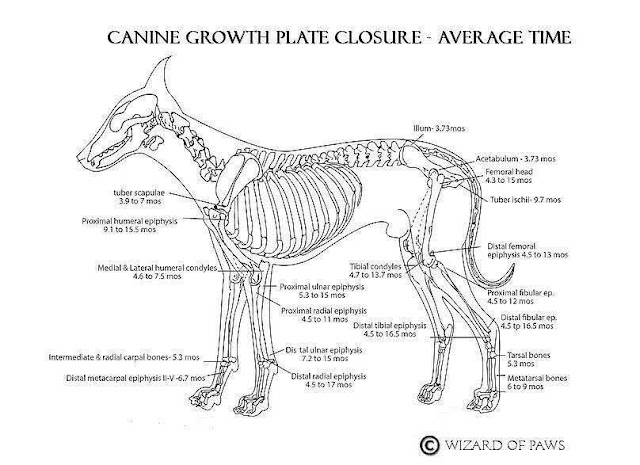 As a veterinary oncologist and founder of the pet hospice program Pawspice, Dr. Villalobos concedes, "It is earth shattering to consider that some of the cancers we have been battling may have been enhanced by early neutering instead of the reverse."

Once a huge advocate of spaying or neutering every dog early in life, after being in private practice for a few years, Dr. Becker noticed many of her canine patients were developing endocrine-related disorders. After a conversation with an expert in the field of veterinary endocrinology, Dr. Becker realized her practice of insisting on early spays or neuters for every dog patient had left many of them with serious health problems.


Illegal in Scandinavia, Surgical Sterilization Is Still Routine in America
September 23, 2013 | 85,247 views
Dr. Michelle Kutzler, an Expert in Animal Reproductive Physiology, Performs a Modified Spay Procedure That Preserves the Ovaries
Today I’ve invited an expert to discuss this topic in much more detail with us. Her name is Dr. Michelle Kutzler. Read more

Generations of veterinarians in the United States have been taught to recommend neutering for dogs between four to six months of age, and certainly before their first birthday. Relatively recent research has revealed compelling negative implications of such “early neutering” in Golden Retrievers, Labradors, Vizslas, and Rottweilers. Now, along comes more compelling research, this time pertaining to German Shepherd dogs.
Is your dog neutered? If so, at what age was the surgery performed?
http://speakingforspot.com/…/german-shepherd-dogs-the-impa…/


Several studies prove significant health risks associated with sterilization, particularly when done at an early age. The most problematic is a delayed closure of the bony growth plates. This results in an abnormal, skeletal development that increases the incidence of orthopaedic problems like hip dysplasia and patellar luxation.


Once a huge advocate of spaying or neutering every dog early in life, after being in private practice for a few years, Dr. Becker noticed many of her canine patients were developing endocrine-related disorders. After a conversation with an expert in the field of veterinary endocrinology, Dr. Becker realized her practice of insisting on early spays or neuters for every dog patient had left many of them with serious health problems.
Dr. Becker quickly changed her recommendation for her patients from automatic spays or neuters, and the younger the better, to a more holistic approach in which surgeries, including sterilization and de-sexing, should only be performed when there’s a medical necessity. She also believes shelter pets should be sterilized rather than de-sexed (spayed or neutered) in order to preserve their sex hormones.

FOX 45 investigates nationwide claims that pets are dying from vaccinations Vaccines rabies  "If I stop rabies vaccinations, how can I license my dog or cat?”Here again, you have to decide how important this is to you. The most important tag to have on a collar is not a license tag: it is a tag that has your name and phone number on it.  Dog Rabies Vaccine / By Will Falconer, DVM 65 Ways Rabies Vaccination Can Harm Your Dog Skin issues. There are many different types of skin issues, including dermatitis, yeast, alopecia (hair loss), hives, rashes, itchy wrists and ankles (where a lot of dogs chew themselves), abscesses, ear and eye infections and anal gland problems. Skin conditions are never “just skin issues” but are a manifestation of deeper underlying disease. Vaccination can cause allergic reactions because cells in the body called Langerhan cells are constantly scouting for antigen (which the rabies virus is full of). When Langerhan cells detect these
Read more

By Bichon Lovers Natural Rearing Breeder - November 11, 2018
Ol’ Roy Dog Food Withdrawn For Deadly Drug Contamination; Pentobarbital Found In Canned Dog Food Today, we learn of yet another national brand of dog food was found to contain the lethal euthanizing drug sodium pentobarbital: Walmart’s brand Ol’ Roy canned dog food. Walmart, the nation’s largest retailer, is now in the process of quietly removing it from all 4,700 stores across America.   If you are buying kibble or canned food you want to read this article:  Rendered Products In Pet Food Would it surprise you to learn that what your beloved pets have been eating is at least partly made of euthanized pets? What Do You Really Know About Rendered Pet Food? Dead Cats And Dogs  Used To Make Pet Food To those that may have found the article about rendered dog food disturbing and didn't believe it was possible. Rendered dog food another article from dog food advisor. Mars/Royal Canin neglects to tell veterinarians and their staff that the legal definition of m
Read more

Pets4life Raw Diet Bichon Lovers Natural Rearing Breeders feed all their adults and their pups Pets4life    Bichon Lovers Natural Rearing Breeder Kibble: Never A Good Option by Dogs Naturally Magazine in Featured Articles, Nutrition And Diet. Looking back at the historical diets of dogs and their wolf ancestors, it is clearly evident that they are carnivores. Their teeth, gut and digestive physiology strongly support this. Dogs have hinged, powerful jaws along with canines and triangular shaped carnassial teeth for the ripping and tearing of flesh and crushing of bone.           Raw Fed Starter  Guide                                                 Dr. Becker Shares Her Updated List of Best and Worst Pet Foods Nature's own miracle food! Raw green tripe is one of the best additions you can make to your pet's diet. Whether or not you feed a balanced raw food diet, homemade meals or commercial kibble; there are many amazing benefits to this smelly, healthy f
Read more
By Bichon Lovers Natural Rearing Breeder - November 11, 2018
Protecting Your Dog From Heartworm The natural deworming  Diatomaceous Earth (often referred to as "DE") is an off white talc-like powder that is the fossilized remains of marine phytoplankton. When sprinkled on a bug that has an exoskeleton (such as bed bugs, ants or fleas) it compromises their waxy coating so that their innards turn into teeny tiny bug jerky. But it doesn't hurt mammals. We can eat it. We do eat it! It's in lots of grain based foods because lots of grains are stored with diatomaceous earth to keep the bugs from eating the grain!   Dosage Food grade Diatomaceous Earth one teaspoon per day for small dogs and 1/2 teaspoon for puppies. For external parasite control, simply rub the powder at full strength into the coat for fleas and sprinkle on bedding. DE Earth     Learn how to apply the D.E. and learn the benefits of it! http://youtu.be/d3OE5dN08I8 Diatomaceous Earth Natural Alternative to Chemical Wormers Other benefits
Read more
By Bichon Lovers Natural Rearing Breeder - November 10, 2018
Do you know what a Titer Test is? Shockingly, many pet owners have no idea! A titer test is a laboratory or in-house veterinary test measuring the existence and level of antibodies (necessary to fight off disease) in your pet’s blood. Basically, it’s a test that will tell you whether or not you actually need to vaccinate your pet. Why is this so important? Because of what can happen if you over-vaccinate your pet! “Vaccinosis”, the name for the chronic disease, is caused by continued use of vaccines. These symptoms mimic the original disease in parts. The most basic method for a titer is where your pet’s blood is drawn and sent away for testing. It ranges anywhere from $150 to $200. The most affordable method is the new “in house” testing procedure. This test is preformed at the vet clinic and it takes about 20mins to get the results. The price range is anywhere from $60 to $80! According to  truth4pets.org , “Although titer testing may cost somewhat more than vaccination i
Read more
By Bichon Lovers Natural Rearing Breeder - November 14, 2018
Bordetella Vaccination for Dogs: Fraud and Fallacy Preventing Kennel Cough Three Critical Problems With The Kennel Cough Vaccine (and what you need to do about them) Bordetella Vaccination for Dogs: Fraud and Fallacy Bordetella or Kennel Cough is commonly required by boarding kennels and veterinary hospitals. These vaccinations are  delivered to a staggeringly large percentage of dogs and the reason is not to protect your dog: the reason is to protect these facilities against liability. Many holistic veterinarians believe vaccinations are the direct link to the chronic diseases we see in dogs today. Does Your Dog Really Need the Kennel Cough Vaccine ? Have you had a veterinarian strongly urge you to vaccinate your dog for Leptospirosis? Or offer you one of those vaccine cocktails
Read more

Bichon Lovers Natural Rearing Breeder
Simcoe, Langton area, Ontario, Canada
Bichon Lovers are reputable breeders! "Acknowledged for being responsible, trustworthy and highly regarded for the health, temperament , beauty and size of their adults and their babies." We take a Holistic approach to our Breeding program choosing food for nutritional value and not price. We provide a very personal service, offer years of knowledge and on going puppy guidance at no extra charge. Health certificate, a written guarantee and CKC reg. Champion bloodlines. A veterinarian wellness exam. Raised in a relaxed healthy smoke free home with an all natural nutritional program and lots of tender loving care. Visitors welcome. References from happy puppy owners available. Pick a Puppy or when available one of our retired Bichon girls! 519-875-1482